Skip to navigationSkip to contentSkip to footer

Beauty: When you think of New Zealand you think of scenes of lakes surrounded by snow capped mountains such as the Wanaka Tree, South Island.

Starting in Auckland in the north and ending in Christchurch in the south, this top to tail rail and coach tour of New Zealand in 2022 certainly captures the travellers imagination.

Join The Senior newspaper and Travelrite International on one of two departures, the first March 10 to 24 and the second November 10 to 24, 2022 and enjoy the delights of rail travel on the Northern Explorer, Coastal Pacific, TranzAlpine and the Taiei Gorge Railway.

After a first night in Auckland, savour a tour of the main sights including the Harbor Bridge, Sky Tower, Auckland City Hall, the Ferry Building, Auckland Museum and fashionable shopping hub of Parnell.

Next morning jump aboard the Northern Explorer train for a journey to Wellington and revel in the five unique geographical regions of the North Island which include farming landscapes, rocky sea vistas, stunning river gorges and majestic volcanoes.

Once in Wellington see landmarks such as the Houses of Parliament - the Beehive - Mount Victoria and its 360 degree views of the city, and the Botanical Gardens, reached by cable car.

Next on the agenda is the Interislander ferry to Picton. Here visit a local winery and later Nelson, famous for its sunshine and golden beaches.

From Picton take the Coastal Pacific train to Christchurch. Sit back and marvel at the scenery with the Kaikoura mountain range on one side and the Pacific Ocean coastline on the other. 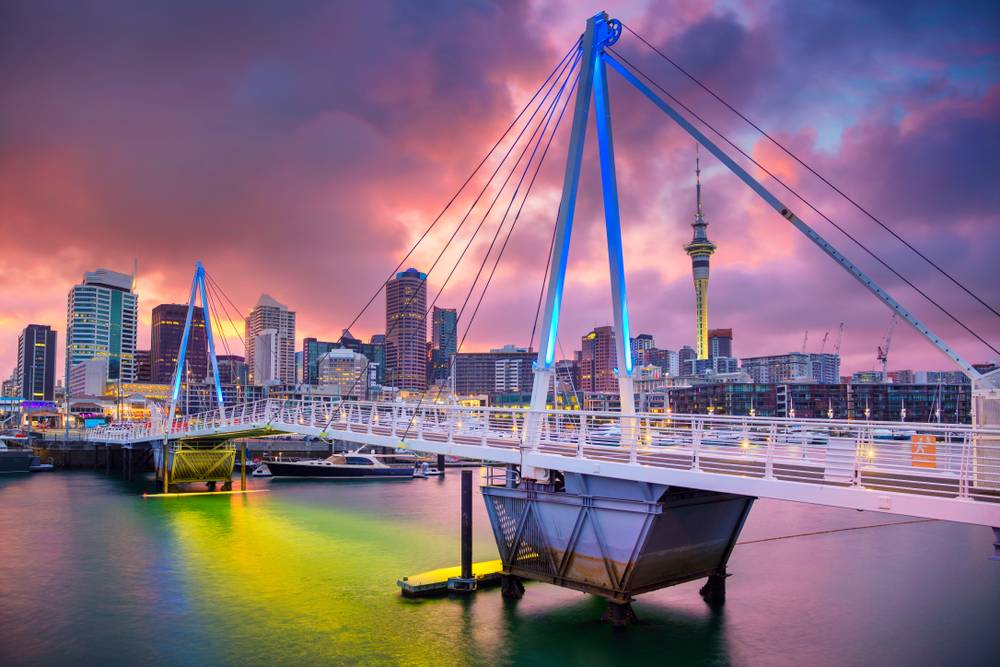 City lights: The tour begins in the thriving metropolis that is Auckland with tours of its main attractions including the Harbor Bridge and Sky Tower.

After crossing some of NZ's best farmland, the train arrives in the South Island's largest city, Christchurch.

Begin your stay in Christchurch with a sightseeing tour and its bevy of modern architecture and historic buildings set against beautiful parks, gardens, rivers and beaches. Explore the nearby village of Akaroa which still retains the ambiance of its French foundations.

The TranzAlpine Express Train comes next into view. Travel from Christchurch to Darfield and continue through beautiful scenery to Arthur's Pass National Park and beyond to the highest most spectacular mountain pass across the Southern Alps.

From Greymouth, board a coach to Franz Josef glacier. One of the steepest glaciers in NZ, Franz Josef Glacier descends deep into the lush native rainforest of the Westland National Park. In this remarkable landscape learn about the glacier's history.

Heading south to Queenstown, travel through Haast Pass and enjoy a stop off at Wanaka, a pretty ski resort town on the lake front.

On the shores of Lake Wakatipu is Queenstown surrounded by magical snow-capped mountains. Sightseeing includes a ride on the 450m high skyline for arguably the best views imaginable.

Dunedin is the next port of call with its beautifully preserved buildings and historic Larnach Castle.

From Dunedin's beautiful railway station the tour joins the spectacular Taieri Gorge Railway. See some of NZ's most iconic scenery on the journey to Pukerangi.

On the Taieri rail branch, the train sneaks across the Taieri Plains and climbs into Taieri Gorge, a deep gorge carved out over centuries by the ancient Taieri River. Photo stops along the way are a must.

A coastal trip back to Christchurch for a farewell dinner before flying out to Australia the following day completes the trip.

This story A Top to tail tour around New Zealand first appeared on The Canberra Times.

No thanks, I’m keeping my ad blocker on